The first reference to giants dates back to 1675, when the first giant couple appeared. The second couple was created in 1727, in the image of the Mare de Déu del Claustre. The feminine figures have adapted their appearance according to the fashions in each era, and it was not until 1935 that they began to be dressed in medieval clothing. The masculine figures have always maintained the same characteristics.

The Solsona giants that are most popular outside the town are the cheekiest ones – the Carnival giants. These include el Gegant Boig (The Mad Giant), who has a signature tune and dance which he performs with the Geganta Boja (The Mad Giant Queen), the Mocós (The Crybaby), and the Geganteta (Princess Giant), the Tòfol Nano, the Xut (Owl), the Draca (The Dragon Queen), the Comte de l’Assaltu, l’Oriol, l’Olímpic, la Vaca, els Nans and the children’s Mad Giants. However, the town festival giants are the most attractive, and out of these, the Gegant Vell (Old Giant) and the Drac (Dragon) are the most symbolic elements of our town festival.

Most of the figures in the Solsona Giants display bear the same hallmark of the artist Manel Casserras i Boix. This same artist, who has now passed away, was responsible for taking care of the giants and bestiary of the town festival for nearly forty years. Casserras also made some of the giants used in the Claustre festivals and the Carnival.

Having started with the giants of Solsona, this local sculptor spread his artistic wings beyond our horizons. The Casserras family workshop is currently one of the leading giant creation centres, thanks to both its artistic quality and the strategic location of Solsona, a city of folklore giants par excellence. Manel Casserras i Solé, son of the maestro, continues his legacy. 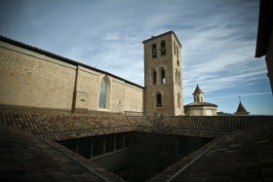