Fairs and festivals »
The Town Festival 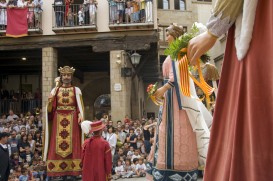 In 2008, the town festival in Solsona was proclaimed a National Heritage Festival, as it is a “celebration that dates back to remote times, and is structured according to ritual sequences based on costumes and symbolic manifestations of identity, and it has a national projection”.

The town festival of Solsona is one of the oldest, and now one of the most traditional festivals currently held in Catalonia. This rich, layman’s heritage festival goes a long way back in time. It was held in honour of Mare de Déu del Claustre (patron saint of the city), for the first time in 1653, and today’s celebrations still maintain the basic structure and the same scenes as in the 17th century. The main days are 8th and 9th September, when the giants, “nans”, “cavallets”, eagle and dragon, and others, come out onto the street to show off all their glory. The “trabucaires” (Catalan soldiers carrying distinctive rifles) are another unique part of Solsona folklore.

For further information or the program of the festival:  www.solsonalafesta.net.

Do you want to see the óssos (bears), the nans (4 ethnic figures), the giants, the eagle or others dancing in the Main Square? Click on the link to see related videos: geganterssolsona.cat